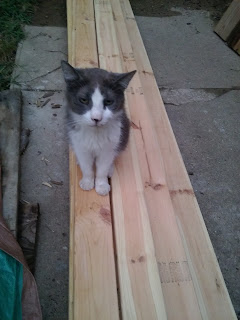 I have had a gray cat most of my life. First there was Mittens and Boots, my parents cat. Then there was Mr. Ted that I picked up in Charlottesville. After he killed the parakeet of Virginia linebacker Mike Power's girlfriend he was sent to exile in Richmond with Ross Deitch. Later he made the move to Newport and Cincinnati. When Becky first tried to pick him up he slashed her on the temple. !5 years ago I was working at 3032 Cohoon St. in O'Bryonville. I heard a noise in the rafter. It was an emaciated and terrified young cat. The next day I put out a can for him. By the second or third can we had totally flipped for each other. And it stayed that way from then on. I never thought there could be a better cat than Hobo and he felt the same way about me. He had another inseparable pal, Busby Berkeley, also an O'Bryonville cat. Last fall Hobo started to get weaker and weaker and now he rests out back. 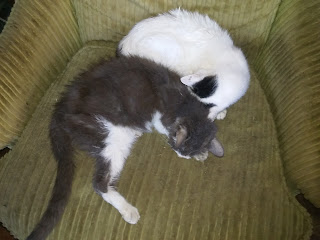